Caesars Sportsbook is still offering a fantastic deal this week (good until Friday, 12/31/21), with customers getting a $100 free bet for simply depositing $100. In a time where sportsbooks have been less generous with their free giveaways, Caesars was kind enough to offer up this deal and give something back to the people. The Sharp App has always been keen on taking advantage of these offers, so we will document the process of trying to turn this $100 into much more. 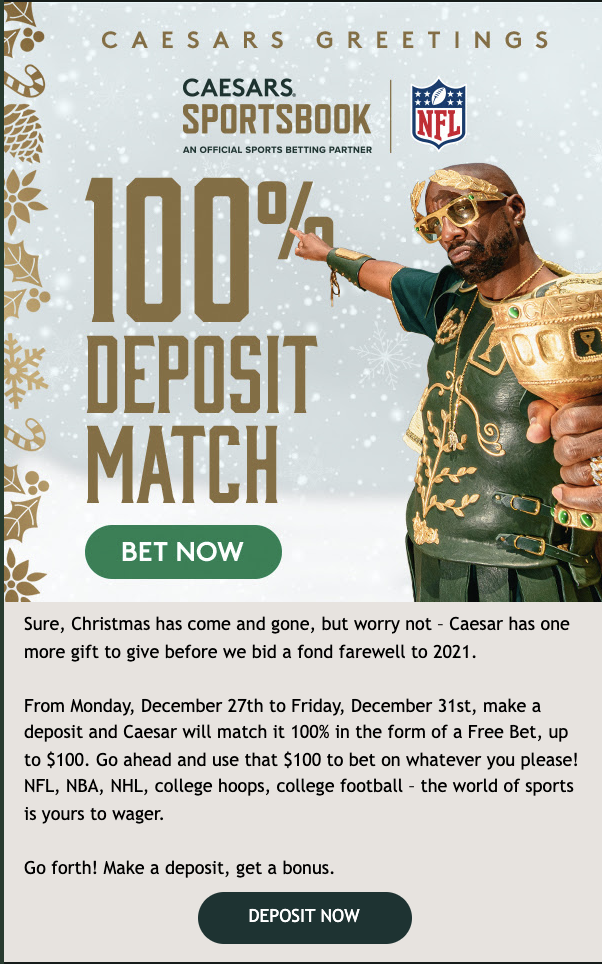 Using the $100 deposit we put in with Caesars Sportsbook yesterday, we were able to secure an extra $83.33 by taking the Miami Dolphins to cover the three-point spread against the New Orleans Saints on Monday Night Football. Right now, we’re playing with house money ($83.33) and also have the initial $100 AND the $100 free bet still left in the back pocket. In actuality, we have $283.33 to play with, but I’ll just use the $83.33 in winnings on a two-leg parlay. If it doesn’t hit, we’ll still have some money in our back pockets for tomorrow.

In the NHL, the Tampa Bay Lightning have telling -115 odds tonight on the puck line against the Montreal Canadiens. The Lightning has an NHL-high 44 points while the Canadiens are second-worst with 17. Both teams will be missing their top two goalies, but Montreal is missing a lot more players due to COVID restrictions. To be honest, the Canadiens would have a hard time keeping up under any circumstances. Tampa Bay is even getting Brayden Point back from injury, making Montreal's outlook less glamorous. 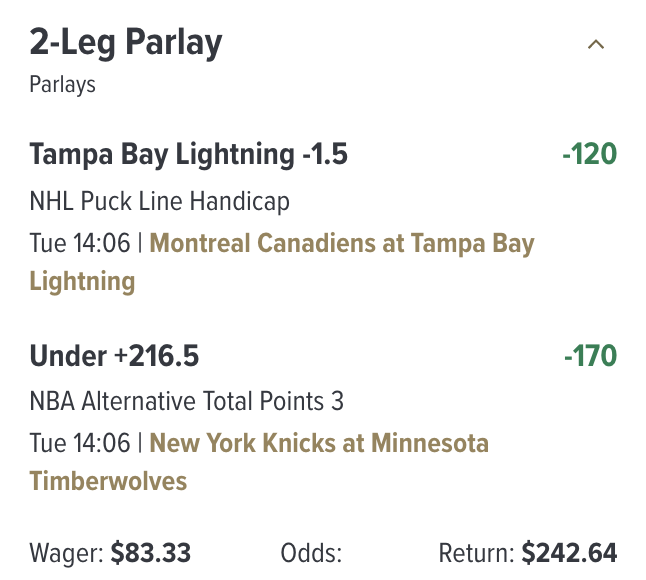 In the NBA, the New York Knicks will be facing the Minnesota Timberwolves, who will be playing their second game in as many nights. Taking a look at the betting landscape, we’re seeing a major difference in bets placed to money wagered: The over on 210.5 points is getting 70% of the bets while the under on 211 points is getting 85% of the money. What we’re doing here is manipulating the total back up to its original area of 216.5 and getting that same type of value from what we just saw in the betting landscape- it actually opened at 218.5. The Knicks run the NBA's sixth-slowest tempo and both teams rank near the bottom of the league (NYK: 22nd, MIN: 25th) in effective field goal percentage. Minnesota is missing Karl-Anthony Towns and D'Angelo Russell while Anthony Edwards is listed as questionable. In addition, each of the last five Knicks-Timberwolves meetings has gone under the total.