Each week Statsational will go over his NFL Power Rankings to bring you up to speed on what the numbers are showing. Are your eyes deceiving you are the numbers wrong? Let us know in the Discord chat. With eleven weeks completed, we still have yet to figure out which team is the clear cut favorite to win it all. Tampa is the betting favorite right now at +500 followed by Kansas City +700. Are you confident betting either of those teams right now?

Dallas, Arizona, Tampa Bay, and Buffalo have been lingering around the top 4 spots for the last few weeks. Each of them has had a setback in recent weeks but nobody behind them has really stepped up yet either.

Dallas put up a dud on offense last week in Kansas City. They have played a brutal schedule so far and that is aiding them in their rating. What is overlooked from that game is how well Dallas played on defense. They gave up just 19 points holding Mahomes to 260 yards and a 71.9 rating. When the Cowboys offense is fully healthy we expect they will be able to put points up on anyone. They may not be the best team in the league but they are going to be very tough to beat in January.

Arizona remains undefeated on the road as they rebound nicely off the blowout loss to Carolina in week 10. The Cardinals went into Seattle and were able to shut down Russel Wilson holding him to just 207 yards. Seattle was only able to garner 266 total yards of offense. The Cardinals were without Kyler Murray at QB once again. The offense was still able to gain 413 total yards. With the way, the Cardinals defense is playing they may be the best team in football once Murray is healthy.

Buffalo drops in the ratings to 4 after a bad loss at home to Indianapolis. It was looking like this was the team to beat for a while but a 9-6 loss to Jacksonville 3 weeks ago and now this blowout loss at home to the Colts has people questioning the Bills. Jonathan Taylor had his way with the Bills. The 3rd best defense on my ratings gave up 185 yards and 4 TDs on the ground to Taylor.

We were a little surprised at where New England showed up last week but after another solid performance from Mac Jones the Patriots are starting to look like they belong in the discussion as one of the top teams in the league. We did not expect one of the largest favorites in week 12 would be the Patriots -6 over Tennessee but here we are. 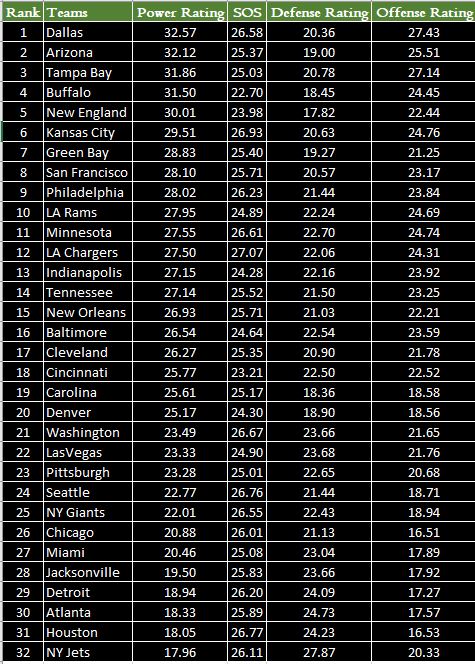