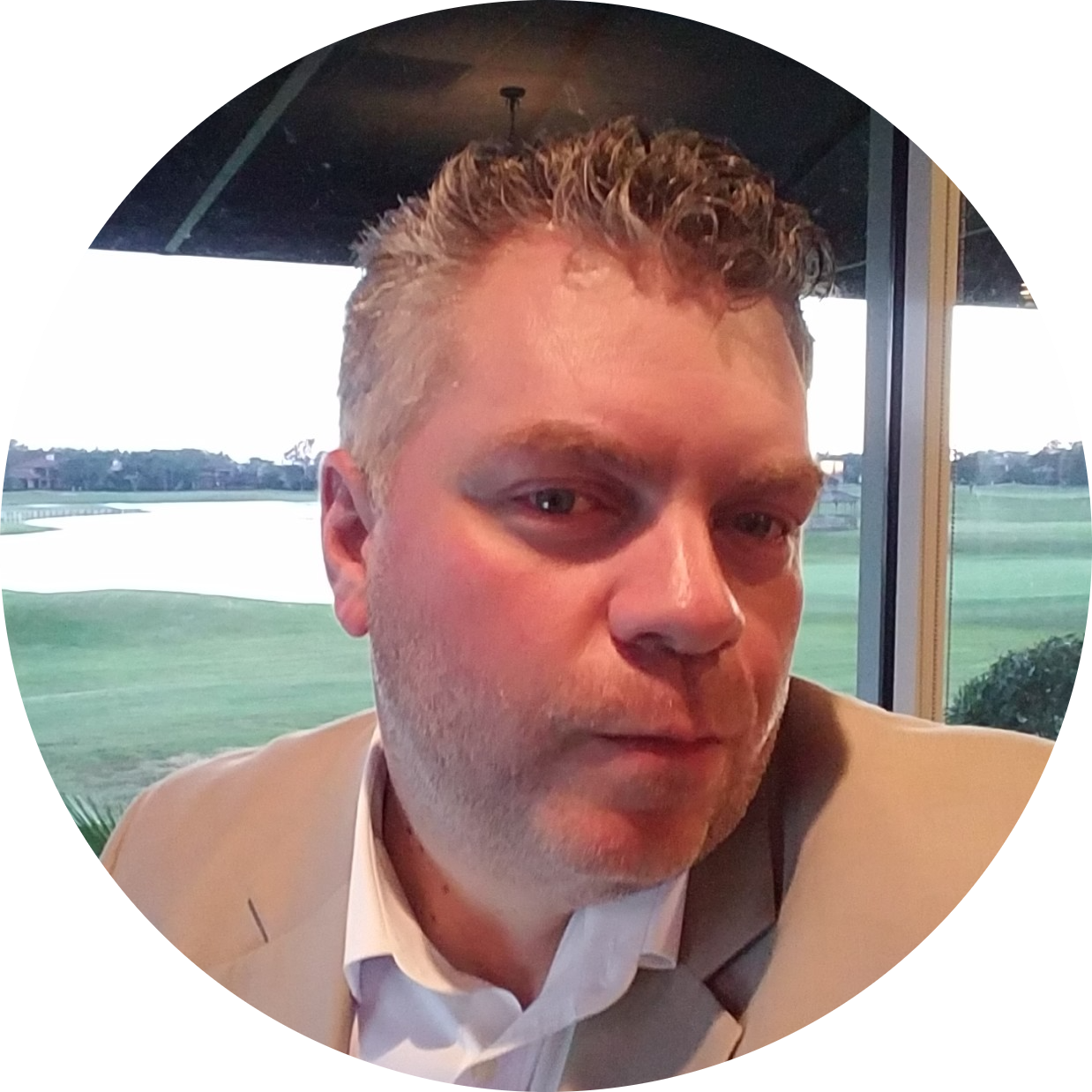 The NCAA Men's Basketball Tournament is upon us once again, and as always, I will be breaking down five ways you can eliminate some top seeds from consideration. In picking potential final four teams and champions, I find it much easier to eliminate teams from consideration to narrow down the selections. The criteria we will use to do this are as follows;

The following comes from a Nate Silver article in the NY Times before the 2011 tournament.

Since the tournament field expanded to 64 teams in 1985, there have been 41 cases in which a school that was unranked to start the season entered the tournament ranked in the AP top 10 (excluding a couple of cases where the team was ineligible for tournament play). These schools, as you might expect, were seeded highly: eight were No. 1 seeds and another 17 were seeded No. 2.Absolutely none of these teams have made the Final Four, however: they are 0-for-41. Instead, they have been the victims of some notorious upsets, like the No. 2-seeded South Carolina Gamecocks losing — by 13 points! — to the No. 15 seed Coppin State in the opening Round of the 1997 tournament, and the No. 3 seed Wisconsin Badgers being one of Davidson's victims in 2008. Three of the No. 1 seeds that fit this description — Michigan in 1985, St. John's in 1986, and Cincinnati in 2002 — lost in the Round of 32.Since this article, I have kept track of all qualifying teams.

84 Teams have scored 73 PPG or less coming into the tournament and had a 1-4 seed. 13 made the final 4 with our first champion coming in 2019 with Virginia. 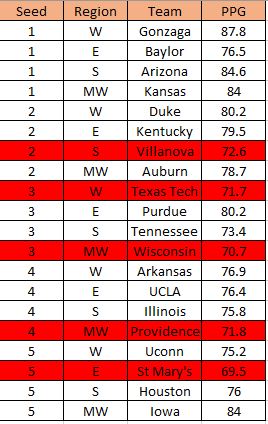 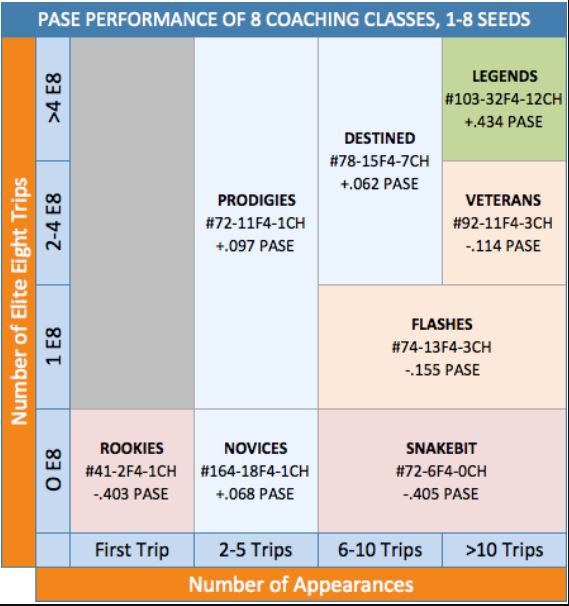 As the chart shows the "snakebit" coaches are ones you will want to stay away from picking to make a deep run. In 2021, 5 seed Creighton got to the Sweet 16, 2 seed Ohio St was upset in the 1st round, and 2 seed Iowa lost in the second round. 2 of the 3 woefully underperformed their seed expectations.This year we have two teams team with a "Snake Bit" coach in a 1-6 seed. (5E) St Mary's - Randy Bennett(5MW) Iowa - Fran McCafferyThe next group of coaches that underperform at close to the level "Snake Bit" Coaches do are "Rookies". These are the coaches making their debut in the tournament. We have three coaches who fit that bill this season.(1S) Arizona - Tommy Lloyd(3W) Texas Tech - Mark Adams(6s) Colorado St - Niko Meved"Legend" coaches outperform their seed expectations more than any other group. The teams with one of those coaches are;(1MW) Kansas - Bill Self(2W) Duke - Mike Krzyzewski(2E) Kentucky - John Calipari(2S) Villanova - Jay Wright5. Scoring MarginUsing the PASE (Performance above seed expectations) stat from the now-defunct Bracket Science, the number one determinant of being able to outperform your seed expectation is scoring margin.135 teams have been a 1-4 seed and come into the tournament with a 15+ scoring margin. 55 have made the final 4 (40.7%), and 20 have won it all (14.8%), including the last three champions. Last season Houston, Baylor, and Gonzaga all made the Final 4 with a 15+ scoring margin coming into the tournament.Two teams this season qualify;(1W) Gonzaga(1S) Arizona(Houston as the 5 seed in the South also has a scoring margin over 15 st 16.9)Of the 167 teams to get a 1-4 seed and have a scoring margin under 10 just 2 have won a title and 11 have gone to the final 4.2021 season(4) Florida ST Lost in Sweet 16(4) Okla. State Lost in 2nd Round(4) Purdue Lost in 1st Round(4) Virginia Lost in 1st Round(3) Texas Lost in 1st Round(3) W. Virginia Lost in 2nd Round(3) Kansas Lost in 2nd Round(2) Alabama Lost in Sweet 16(2) Ohio State Lost in 1st RdTeams under the 10 scoring margin this season(2S) Villanova(3MW) Wisconsin(4W) Arkansas(4S) Illinois(4MW) Providence

33 Champions since 1985 have been a 1-4 seed with just three seeded higher. So for a potential champion, we should eliminate all teams seeded above 4.From the above, we can eliminate the following top 4 seeds from championship contention;(Region) Team, corresponding number to above stat1 Seeds(S) Arizona 1,42 Seeds(S) Villanova 3,5(MW) Auburn 2

4 Seeds(W) Arkansas 2,5(S) Illinois 5(MW) Providence 3,5What we are left withWest1 Gonzaga2 DukeMidwest1 KansasSouth3 TennesseeEast1 Baylor2 Kentucky3 Purdue4 UCLALast season we could not eliminate any of the 1 seeds. We wound up with the top two teams facing off in the finals. The upset happened, which if you read this last season may have put you on Baylor and possibly helped you win your bracket pool. It did for me.I like to look at coaches when filling out the brackets. Matt Painter of Purdue has 13 trips to the dance with just one Elite 8 appearance. Rick Barnes at Tennessee has been a notorious underachiever in the tournament. He has 25 appearances with one Final 4 Trip and two other trips to the Elite 8. You may want to stay clear of them both.If we avoid Tennessee, that leaves no top 4 seeds in the South. Perhaps that means Houston makes another run. They are ranked 4th in the country on KenPom. In a seed-weighted pool, having them in your bracket to get to the Final 4 could win the pool even if you do not get the champion correct.When picking a bracket, you need to use some game theory. For those familiar with Daily Fantasy Sports, ownership is an essential factor in determining who you want to play in your lineups. The same thing applies in picking a bracket. I will have another article going in-depth on this topic.Let's have a look at where the country is picking on ESPNGonzaga is the obvious top choice. They are picked to win it all in 29.2% of ESPN pools as of this writing. If you have a pool with 100 entries, you can expect about 30 entries to have Gonzaga to win it all. In my experience, there will be less than that. Participants will try and find an upset pick to win a pool. We should see at least 25% in most pools, though. 538 puts the Zags at 27% to win it all. Kenpom has Gonzaga at 27.5%, and Draftkings is about 21% after factoring in juice, 25% with the juice in.The other top contenders we did not eliminate look like this

These numbers will change as the week progresses. Wait as long as you can before putting in your final brackets. I am going to go into more detail on the game theory behind the brackets in another article. The numbers on Gonzaga are not so bad that you could not take them in your bracket. If you do, you will need to differentiate yourself elsewhere. Most likely with your final 4 selections. My next article will help with that.

You could look to take a 1 seed not getting respect like Kansas. You will not have a ton of competition in your pool if you are correct with Kansas.If you are in a pool that weights the seed then you may want to look to a 2 seed like Kentucky. In a 100 entry pool you may be competing with just 6-8 entries should Kentucky win it all.I will have more on the tournament as the week progresses. Good Luck!

If you want to test your skills and potentially win some prizes enter the Sharp App Bracket Contest. FREE TO ENTER 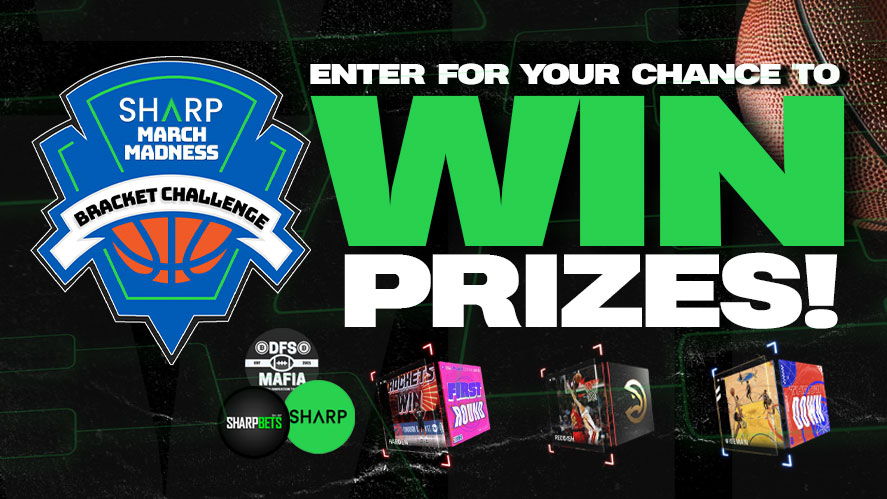