Each week Statsational will go over his NFL Power Rankings to bring you up to speed on what the numbers are showing. Are your eyes deceiving you are the numbers wrong? Let us know in the Discord chat. We have just 2 weeks remaining in the regular season and I am not sure any one team has established themselves as the team to beat. Each week it seems to change. Let's have a look at the top 5 teams in this weeks rankings.Buffalo BillsThe Bills have maintained the top spot for a few weeks now despite losing some tough games along the way. They still maintain the highest scoring margin of any team in the league at 10.9. Buffalo has been able to beat up on the weak teams but when playing teams that are going to the playoffs they have not fared so well. They beat the Chiefs early in the season and are now coming off an impressive win over the Patriots. With Atlanta and the Jets remaining they should finish strong and get to 11 wins.Tampa Bay BucsJust when we thought the Bucs might be the best team in the league they go and get decimated with injuries. They had already been struggling with injuries in the secondary but now they are playing without a majority of the offense. Last week they relied heavily on Antonio Brown. It was nice to see Brown back as a number one WR and he did not disappoint. He caught 10 of 15 targets for 101 yards. This team will always be dangerous with Brady at the helm but they may not be as strong as the number 2 ranking they are garnering right now.Dallas CowboysIf Dallas is going to play like they did last week against Washington the rest of the way then we may be looking at the best team in the NFC. Dak is starting to show signs of the Dak from earlier in the season. The defense continues to improve and lead the league with 9 return TDs. They have big playmakers on both sides of the ball. When clicking it will be hard to stay with them. The Cowboys get Arizona at home and then finish in Philadelphia. With an outside chance of home field and a bye in the first round, they will need to win both. That still may not be enough but if they can look impressive in the last 2 games it may push them towards being the favorites come playoff time.Kansas CityAfter a slow start, we are starting to see the Chief team we anticipated coming into the season. The defense has been great these last few weeks giving up 10 or fewer in 5 of 7. We know the offense can be the best in the league. If the defense continues at this level then perhaps the Chiefs are the best team in the AFC. The Cheifs control their own destiny. If they win the next two, @Bengals and @Broncos, they will be the number 1 seed in the AFC. Winning those two games will not be easy but the way they are playing I would expect them to do that. With home field, they will be hard to bet against for another Super Bowl run. New England PatriotsThe Patriots have been the biggest surprise of the 2021 season for me. You can never anticipate great play from a rookie QB but that is what New England has gotten from Mac Jones. Obviously, they have a head coach who knows how to win. They are not quite on the level of Kansas City and I think the chances of them going into Arrowhead in January and winning a playoff game are slim but you never know. They finish up with Jacksonville this week and then at Miami in the finale. They can easily get to 11 wins and would need Buffalo to falter to win the division. Regardless of what happens this has been a great year for the Pats. 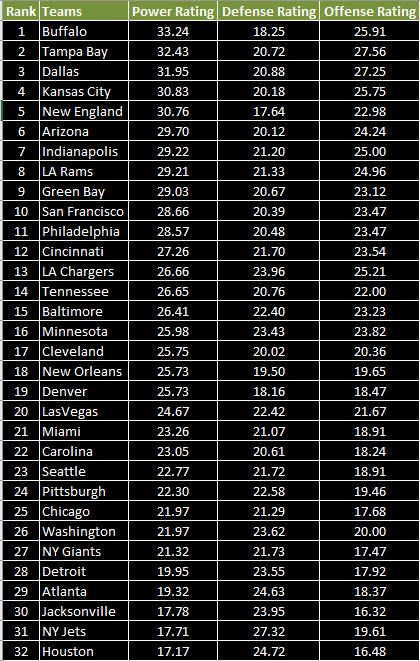